Maker Movement Gains Traction in the Midwest with NSF Funding

Earlier this month, two Indiana University researchers received a $1.2 million grant from the National Science Foundation (NSF) to study the successes of the Maker Movement in China and cultivate the movement in the United States Midwest. This grant and new study focuses not only on the academic importance of the movement, but the economic importance as well. So, why the Midwest?

While great leaps have been made in Maker Movement support in the United States, emphasis has primarily been on the coasts. Researchers and the NSF believe it is time to further the movement in the interior United States: "The Midwest has a proud tradition of manufacturing," Shaowen Bardzell said. "The next generation of computational products -- from cars and dishwashers to clothing and medical devices -- will be closely tied to manufacturing. We see potential for everything from prototyping to mass production in the region." (source)

Over the next four years, researchers will be "documenting and analyzing policies and cultural practices supporting serious makers and maker spaces in China, Taiwan and the U.S. Midwest" with the aim to discover best practices for innovation, and a way to turn making as hobby into making as business.

While it sounds like a serious endeavor that would perhaps remain in a collegiate setting, the intensive study will also hold summer school workshops, based on the Making Subjects conference held in Indiana in 2014. The workshops will "develop how-to guides, kits, policy recommendations, curricula and computer hardware supporting what they're calling "professional making." (source)

The study will focus on Indiana and Michigan because of the already thriving maker collectives such as BloomingLabs and ClubCyberia. Though the funded study will focus on two states, it will likely pave the way for other Midwestern states to use maker movement models to spur economic growth and industry innovation.

The rising prevalence of the maker movement in classrooms across the country, the emphasis placed even by the US Government (e.g. White House Maker Faire), and the rising availability of tools such as 3D printers for schools (check out Trifecta™ 800 3D Printer) mean that students will have even more opportunities to create, tinker, hack, and make. In turn, employers and colleges will be looking to these students for innovation. 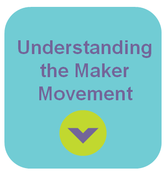